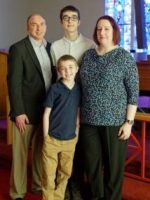 Sean Fletcher and his family moved to Winona in January of 2020 from Rapid City, South Dakota. Sean had previously been an Associate Pastor in Rapid City and was a Pastor of Children and Families in Sioux Falls, SD and Zephyrhills, FL; and a Middle School Pastor in Clarksville, TN. Sean graduated Austin Peay State University in May of 2007 with a Bachelors Degree in Education. Sean has attended Nazarene Bible College and was ordained in 2020.

Collene had previously worked as a civilian in the financial department of the United States Air Force. She currently works as for WNB Financial and is pursuing her Bachelors Degree in Business Management.

Both Sean and Collene are veterans of the United States Army. Sean was medically retired in 2003 after returning home from the war in Afghanistan. Sean also served during the war in Bosnia. Their oldest son Tristan lives in the Washington D.C. area.

They are excited and thrilled to be in Winona and strive to live out their personal mission of loving God, loving People, and leading people to Jesus Christ.